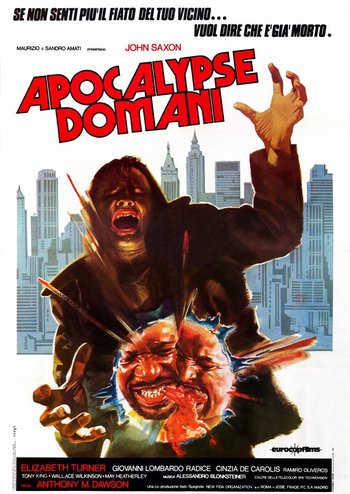 Cannibal Apocalypse, originally titled Apocalypse domani ("Apocalypse Tomorrow"), is another Italian exploitation film during the height of the cannibal craze brought on by films like Cannibal Holocaust.

This time director Antonio Margheriti changes the usual cannibal formula by taking the action out of the jungle and placing it into the city as well as making the cannibals a more zombie like virus.

Norman Hooper (John Saxon) is a commanding officer in The Vietnam War. After raiding an enemy post Norman discovers that two of his friends have been taken prisoner in a pit. When Norman tries to help them out, he is horrified to discover them eating a woman who fell in during the battle. One of the cannibals, Tom, proceeds to bite Norman.

Several years later and Norman is living a normal life in the suburbs of Atlanta with his wife Jane until one of the former prisoners Charlie is released from the mental institution and tries to get a drink with his old friend. After being turned down, Charlie's old munchies soon get the best of him as a he attacks a woman in a cinema before getting into a fight with police. Though he soon returned to the institution, Norman begins to get the urge to consume human flesh. Eventually he caves and Norman, Charlie, Tom, and an infected nurse, Helen, escape and begin going on a bloody rampage through the streets.

The movie was one of many to be successfully prosecuted as a video nasty in Britain during the 80s.