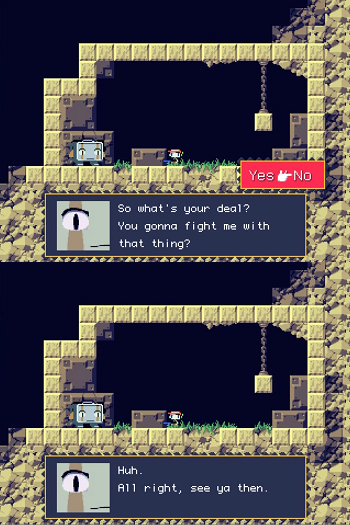 Occasionally, games will decide to give you a break and actually feature methods of skipping Boss Battles, most often by talking them out of fighting the player or by using some convenient environmental feature to instantly destroy them.

Of course, skipping the boss may not be the best course of action if you earn a nifty reward by defeating it through normal means, or if there's one for 100% Completion. But, hey, that's the penalty you get for taking the easy way out.

The Skippable Boss is occasionally the alternative to the Hopeless Boss Fight. It most frequently occurs in (but is not limited to) RPGs.

Compare Route Boss, which you only fight on a certain route in the game. If you do the "good" route, you may bypass one or more brutal bosses in the "bad" route. See also Puzzle Boss and Cutscene Boss.

The inverse is any kind of Optional Boss; the difference is that the Skippable Boss is fought by default; the Optional Boss is skipped by default instead.

Note that a Speed Run, particularly tool-assisted ones, can make bosses skippable unintentionally.

Who said it's only a Video Game trope?

Who said it's only a Video Game trope?