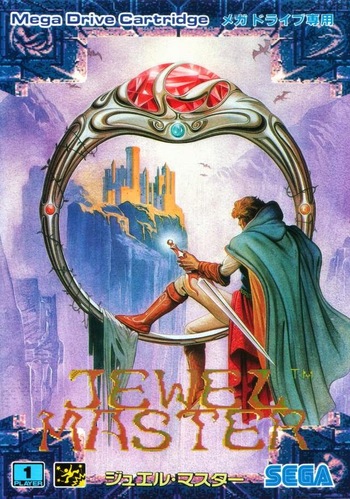 Twelve rings to rule 'em all...

Once upon a moment in time, there was kingdom known to all as Mythgard.
Mythgard prospered in peace until the first coming of the Demon King, Jardine the Mad.
Leading his Dark Legion, Jardine was but a step away from obliterating the kingdom...
It was then that the Twelve Masters of the Elements rose up to put an end to the Demon King's evil designs.
A fierce battle ensued until there remained but four masters opposing Jardine.
Pooling their powers into a Holy Blade, the Four Masters prepared for the Final Battle...
The opening Info Dump

Jewel Master is a 1991 SEGA action game made for the Sega Genesis.

A High Fantasy adventure with elements of Metroidvania and some Run-and-Gun style of gameplay (after getting the titular artifacts), you are the Jewel Master, a Magic Knight in the land of Mythgard.

As elaborated in the backstory above, a powerful demon lord named Jardine rules over the land, and only the magic jewels of the Twelve Masters of the Elements, embedded in rings, can put a stop to Jardine's reign. You set off on a quest to retrieve all twelve of those rings for a final confrontation.

The game is notable for the assorted combination of power-ups available through a combination of rings, which can be customized in a separate menu and implemented during gameplay.

The First Ring contains the Jewel of Tropes...

There is no mention in history of the battle waged between the Jewel Master and the forces of evil.
But legends do speak of twelve magical gems and an ancient kingdom tha tflourished in peace.
Such is the stuff of legends...