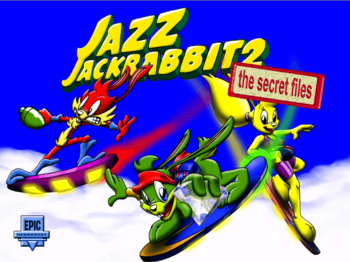 Remember Aesop's The Tortoise and the Hare? Imagine that same struggle, only 2,000 years into the future with both participants as anthrophomorphic animals, armed to the teeth and out for each others' blood.

Developed by Epic Megagames, these games starred the titular rabbit hero with quick feet and a big gun, crossing galaxies to butt heads with the evil Devan Shell and to free the captured princess of his home planet. Once considered PC gamers' response to the likes of Sonic the Hedgehog, the Jazz games sold on fast-paced Run-and-Gun action (with bonus levels surprisingly similar to Sonic's) and the titular Mascot with Attitude. The first two games in the series received many expansion sets, including Christmas-themed ones, and the franchise ground to a halt when the third game failed to ship. Surprisingly the games still maintain an active online community, and Jazz 2 is still actively played online by the proud and the few to this day.

On 30 November 2017, both games were made available on GOG.com, marking the first time they have been available on modern systems (and the first official release of Jazz 2's expansion pack, The Secret Files, outside of Europe).

Got a Spiritual Successor of sorts with Freedom Planet.

Not to be confused with Bucky O'Hare and the Toad Wars.

True to its name, Tubelectric is a place where you can use tubes as a mode of transportation.

True to its name, Tubelectric is a place where you can use tubes as a mode of transportation.