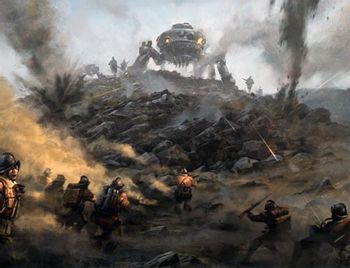 In the grim-dark present of an ancient steampunk world, there is only war...
"The war is becoming complicated... A true nightmare... The last bit of the old world is now lost. The line between soldier and civilian... should never have been crossed..."
from the trailer

of Iron Grip: The Opression
Advertisement:

Iron Grip: The Oppression is a 2006 Total Conversion for Half-Life 2 by indie game developer Isotx, set in the steampunk and dieselpunk-themed fictional universe of Iron Grip. It features urban guerrilla warfare by combining elements from two different genres. A player can choose one of two sides in this game, the Rahmos City Guard or The Resistance. The Rahmos side is a Real-Time Strategy game, generally played by a single player (or a very small number of players in large games). The Resistance side is played as a cooperation of several players, each playing a First-Person Shooter in a very similar manner to Half-Life 2. Available here

In 2008, it received a full-blown stand-alone sequel (built in a heavily updated version of the older idTech3 engine), titled Iron Grip: Warlord. It's more of the same concept (Rag Tag Bunch Of Misfits guerilla fighters vs. The Empire), but adds a more Tower Defense feel to the RTS element of the game. As in Opression, the sequel is aimed primarily at co-op gameplay between human players, but offers various other multiplayer modes as well.

The third game in the series, a Free-To-Play multiplayer TBS called Iron Grip: Marauders, is currently available on Steam since September 30, 2011. March of War, also by Isotx and also on Steam, incorporates many of the same themes and styles of the Iron Grip series (the main difference is that Steampunk has been switched out in favor of Diesel Punk).