All Planets Are Earth-Like 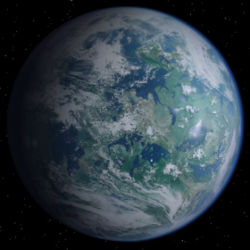 That science fiction trope where planets fall into two categories: Earth-like (solid, with a human-breathable atmosphere and the same gravity, even if completely barren), and gas giants. And often, many of the gas giants have Earth-like moons. Even the most inhospitable of Single Biome Planets are not immune.

There is, of course, a certain subjectivity regarding the definition of "Earth-like". In some works, "Earth-like" means that a human being can walk around without a pressure suit and not die, but everything else (the presence of animals and plants, the weather, the gravity, and so on) might be vastly different. In other works, "Earth-like" means not only are pressure suits unnecessary, but a person can eat the plants and animals, drink the water, walk around in the gravity without a lot of effort, survive the weather, and so on.

Often justified by mentioning terraforming; series without terraforming invariably have many life-bearing planets that are perhaps more similar to Earth than most would consider plausible.note We don't actually know how common or uncommon Earth-like planets are in Real Life, and thus it's hard to judge "realism" here objectively. For what it's worth, NASA's Kepler mission so far suggests maybe one in about 30,000 stars might have a planet that's Earth-like in terms of size and orbit, at least, though not necessarily in terms of atmosphere or other important details. There are estimated to be between 200 and 400 billion stars in the Milky Way, so that's at least six million inhabitable planets in those terms, before counting near-Earth-sized moons... needless to say, even if that number’s only a small percentage of the many exoplanets out there, in human terms it’s quite a promising amount. Hell, even with terraforming, there still would not be too many planets in one solar system that might be human-inhabitable without some sort of huge sunlight-focusing and gathering apparatus in orbit, since the planets' distance to the sun seems to be the main factor. There is also some theories that an Earth-like planet would be the ideal type for (carbon-based) life (but again, this is just a theory). Additionally, even if a planet is terraformed, it still would look mostly the same as it did before, except a different color (if Mars were terraformed, it would still have its volcanoes and craters).

Can also be justified by The Law of Conservation of Detail. Most people are unlikely to visit a planet where they can't breathe, so Earth-like planets will tend to be the only places anything interesting is happening.

This frequently happens because at least half of science fiction shows are shot in British Columbia, which conveniently happens to be located on an Earth-like planet (Earth).

In live-action TV, this is pretty much inevitable, since creating a convincing alien planetary setting tends to require (a) a great deal of budget and F/X spent on a set that must be built very quickly and most likely will not be used again, and (b) any actors appearing in that setting to don costumes (also expensive, but more potentially reusable) which, if they are convincing full-protection envirosuits, will usually obscure the face and make acting more difficult. (See Rubber-Forehead Aliens for a reverse example of that problem.) Movies, animation and novels, less bound by time and budget concerns, have a somewhat better record, but even there the ability for human characters to see, be seen, and interact with each other without significant inconvenience tends to trump realistic assessment of xenoplanetary environmental conditions.

Of course, this makes it problematic if some species wants the resources of a certain planet and are not concerned about the fate of its inhabitants. You'd think that a universe full of uninhabited planets would be a wonderful resource for metals and other minerals, but no.

Since this trope is so ubiquitous, only Lampshade Hangings, subversions and aversions ought to be listed.