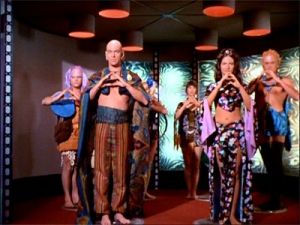 Dr. Sevrin (the bald man in front) and his followers.
"I reach that, brother; I really do!"
Advertisement:

Kirk and the Enterprise are in hot pursuit of the stolen spaceship Aurora. The Aurora isn't giving up easily and leads them on a high speed chase. (High as in warp, not what you were thinking.) The cruiser's engines become strained from the chase and the whole thing goes ka-blooey! Fortunately (or not), Scotty manages to beam aboard the six miscreants before the cruiser explodes.

The six spaceship jackers are a group of young idealists in search of the mythical planet Eden and led by the brilliant but insane engineer Dr. Sevrin. Among them are Tongo Rad, the son of a Catullan ambassador (which prevents Kirk from simply throwing them all in the brig), Adam (Charles Napier), who mostly sings Protest Songs, and Irina Galliulin, a New Old Flame of Chekov's.

Kirk wants to bring this group to the nearest starbase, but of course they have other ideas. They've come up with a Zany Scheme involving pressure points, ultrasonic sound waves, the Galileo, and a musical hubcap.

The Fan Nickname for this episode is "The One with the Space Hippies".

The Way to Tropes: