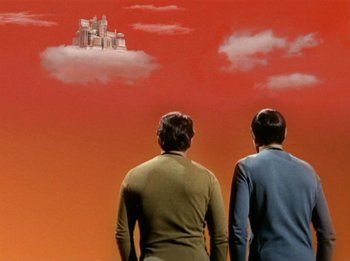 It's only a model.note Shhh!
Advertisement:

A plague on planet Merak II is killing off all the vegetation. Never fear! The Federation is here! The Enterprise comes to the planet Ardana to pick up the zenite needed to end the plague and save the planet.

Spock and Kirk tell Plasus, the High Adviser of Ardana's ruling council, that they'd rather dispense with the frills of a welcoming committee and simply take the promised zenite and go, seeing as how it's an emergency. Plasus reluctantly agrees to meet Kirk on the planet surface outside the mines where the promised zenite is waiting. Kirk and Spock beam down to find no zenite, but a gang of Devo fans who seem a bit pissed off....

It seems they don't like being slaves in the zenite mines while the ruling class gets to lounge around in their pretty city in the clouds. Go figure! Furthermore, Stratos is unknowingly responsible for stunting the Troglytes' minds as well as their livelihoods, and they have no idea of this, so Kirk takes it upon himself to prove the real issue at hand, even if it means making himself one of the guinea pigs.