Gotta Get Your Head Together 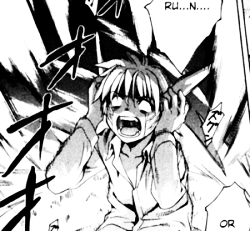 Joshua tries to fight off the power of demon horns.
"I've never before realized that "cacophony" was onomatopoeic: the noise of the Poultry Bldg. is cacophonous and scrotum-tightening and totally horrible. I think it's what insanity must sound like. No wonder madmen clutch their heads and scream."
— David Foster Wallace, Getting Away from Already Being Pretty Much Away from It All
Advertisement:

The head is where the brain is, and the brain controls all conscious and unconscious functions. So when there's some external, intangible assault on the brain, cranium or ears, it's only natural to seek to protect the head. this is the resulting trope, most frequently seen in comics, sci-fi, games, and animation.

If a mind control power is used, or a vicious psychic assault is going down, the character(s) attempting to resist it will clutch their heads, usually in pain.

If a sonic assault has been unleashed, the victims will clutch their heads to protect their ears.

Variations on the headclutch include huddling into a ball on the floor, falling to the knees, or doubling over as if attempting to shake off the intruding influence.

This pose, often seen in tandem with The Scream, can also be encountered in situations where a powered character is reaching the upper limit of their concentration and ability; which makes this trope a relative of the Pstandard Psychic Pstance. It often precedes Your Head A-Splode.

As mind manipulation technology has not yet been perfected, we cannot ascertain whether or not the psychic variant is Truth in Television. The sonic version is, though.