Comic Book / The Attack of the Annihilator 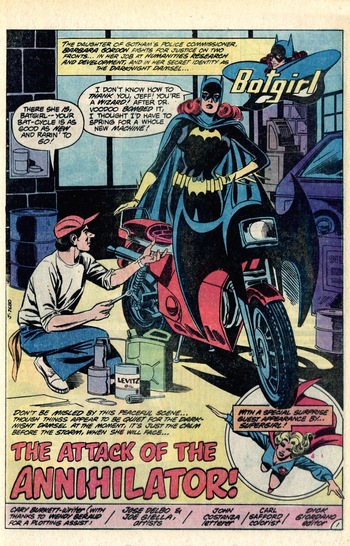 The Attack of the Annihilator is a Batman 1981 storyline written and drawn by Cary Burkett and Jose Delbo and published in Detective Comics #508-510.

Barbara Gordon must protect Gotham from the self-named Annihilator, a scientist called Kenneth Anderson who evolved into a super-powerful mutant after being exposed to alien energies during an experiment, and now wishes to raze Gotham to the ground.

The Annihilator is both mad and powerful, and he might be more than Batgirl can handle. Fortunately, a certain Linda Danvers happens to be visiting Gotham and joins the battle when she feels her old friend is in trouble.

Since the Batman is off on a Justice League mission, it is up to both heroines to save Gotham from the newest dangerous lunatic threatening innocent lives.