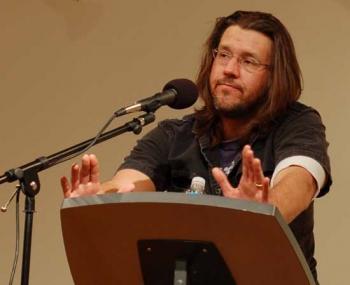 Technically, he began writing in The '80s; but he was in grad school at the time, so it doesn't count.

Wallace was known for his unique brand of literature, characterized by long, rambling sentences, subtle irony, and complete incomprehensibility. His nonfiction is more accessible, but still full of epically long sentences and footnotes.

Within literary circles, he is most famous for his second novel, Infinite Jest, which is partially about a videotape that is so absorbing that anyone who sees it loses interest in sleep or food and eventually dies.

His group of short stories all going by the title "Brief Interviews with Hideous Men" (four of which appear in his short story collection Brief Interviews With Hideous Men along with a bunch of other, unrelated stories) was adapted in 2008 by Jon Krasinski (aka Jim from The Office) in his first foray into directing. Unfortunately, Wallace never saw it. After a long battle with severe depression, he died by suicide on September 12, 2008, at the age of 46.

Between Dead Artists Are Better and the fact that he wrote some of the most experimental fiction of his time, Wallace will, with Jonathan Franzen (a good friend and frequent correspondent of his and a common if controversial source of information on Wallace himself), likely be remembered as the premier American Lit Fic writer of the '90s and '00s, and (most likely) of Generation X more generally (with Dave Eggers and Chuck Palahniuk coming in a distant third).