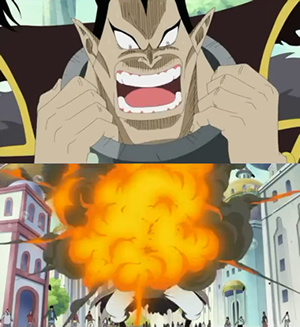 The most effective way of keeping slaves in line.
Ms. Bitters: No leaving class without a hall pass, Zim.
Zim: Of course.
[Ms. Bitters places a collar around Zim's neck]
Ms. Bitters: If you leave school grounds, it will explode.
— Invader Zim
Advertisement:

The government needs a badass special operator for a suicide mission no sane person would undertake. So they recruit a suitably trained prisoner for the job. How do you ensure that the prisoner will cooperate and not kill you and head for the hills as soon as their cell door is opened?

You attach a bomb to them.

This is a common means of ensuring that people do things they normally would not do because of common sense or other factors. While there are occasions where the bomb is physically implanted, it is usually in the form of a Slave Collar locked around the person's neck. The collar can have a detonator operated by the mission controller. It can be on a timer giving the operator a strict time limit within which to accomplish the mission. Or it can be triggered by proximity to a detonating device placed to prevent their escape.

It isn't always for a government mission that this method of control is used. Explosive collars can keep prisoners from wandering off. They can make friends kill each other. They can make law-abiding people commit crimes.

The collar is always accompanied by a promise to remove it once certain conditions have been met, but there's never a guarantee.

See also Why Am I Ticking?, Strapped to a Bomb, Boxed Crook, and Your Head A-Splode. For non-exploding examples, consider a Restraining Bolt, Slave Collar, or Shock Collar. Sometimes the last trope can overlap with this one.

The Deadlock Collars give a painful shock to the wearer and could even kill them if the "contestants" misbehave in anyway.

The Deadlock Collars give a painful shock to the wearer and could even kill them if the "contestants" misbehave in anyway.