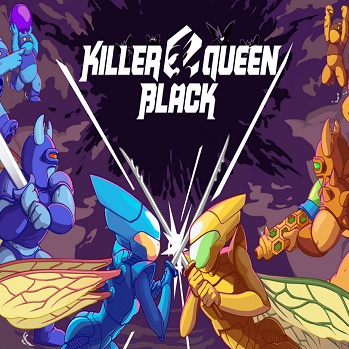 Killer Queen, created and designed by Josh DeBonis and Nik Mikros of BumbleBear Games in 2013, bills itself as the world's first ten-player arcade strategy game. It is a single-screennote (two cabinets, simultaneously showing the same screen) Platform Game in which two teams of five, each consisting of four Drones and one Queen, struggle for dominance.
Advertisement:

The basic rules were originally worked out as a physical game, played on a field by two teams with props (which is why the arcade version is frequently referred to as Killer Queen Arcade). Gameplay in the arcade version resembles a cross between Joust and the original Mario Bros.; the controls are simple — a joystick and a button to either jump or flap your wings (if you have them). There are three paths to victory:

A sequel developed in conjunction with Liquid Bit and entitled Killer Queen Black was announced at E3 2018. It was released on Nintendo Switch and PC via Steam on October 11th, 2019, with cross-play compatibility between both platforms. The gameplay is adapted into 4v4 battles rather than the original 5v5, however the game does introduce new stages and new station upgrades, a revised control scheme, and a new visual style and soundtrack.