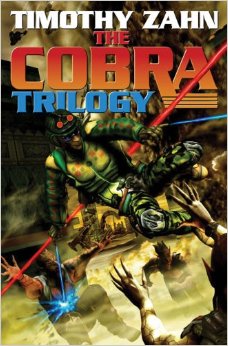 A series of books written by Timothy Zahn, which analyse and deconstruct the idea of Super Soldiers in a Space Opera setting. The original trilogy was written in The '80s. Twenty years later, a second trilogy "Cobra War" was written, followed by a (current) third, "Cobra Rebellion". The books are:
Advertisement:

The series opens with the alien Troft having conquered two worlds from the Dominion of Man. Young Jonny Moreau volunteers to join the army, with a particular interest in organising guerilla resistance on the occupied worlds. Recognising his aptitude for this, he is shifted into the experimental Cobra programme, which equips soldiers with such wonders as implanted weaponry, unbreakable bones, servos that grant Super Strength and a nanocomputer that allows them to pull off complex moves and auto-target enemies. Crucially, none of this is obvious from the outside, allowing the Cobras to blend in with the general populace.

Only a part of the first book is devoted to the actual war. After the Trofts are defeated, suddenly humanity has to try and deal with the Cobras as they struggle to reintegrate into normal society. Sooner or later, accidents happen, and Moreau is responsible for the solution: creating colony worlds spearheaded by the Cobras on the other side of Troft space. Some years later, the "Cobra Worlds" are cut off from the Dominion of Man and must rule themselves. The later books follow the adventures of Moreau's Badass Family descendants as they deal with threats from the Troft and the lost human colony world of Qasama.

Not to be confused with Space Adventure Cobra.