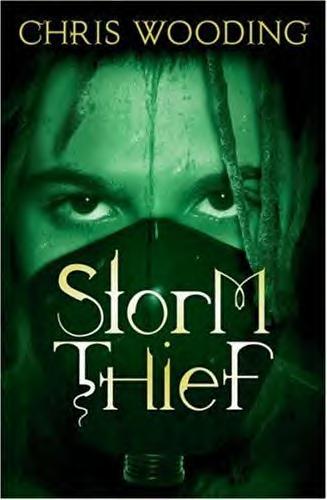 "Anything can happen...at any time."
Advertisement:

Storm Thief is a 2006 Science-Fiction novel by Chris Wooding, author of Poison, The Haunting of Alaizabel Cray, Crashing, Kerosene, and The Broken Sky series. It tells the story of Rail (pictured) and Moa, a pair of thieves who come from one of the many ghetto districts in the city of Orokos. The city is plagued by Probability Storms, which are tempests of a substance called "aether" that change whatever they touch. The two are given a job by the Thief-Mistress, Anya-Jacana, and find a strange artefact that allows Moa to phase through walls. They end up on the run from their gang, who wanted said artifact.

Elsewhere, a Golem named Vago escapes his master's home after getting fed up of his beatings. He's carrying the preserved body of a seabird, which implies there is something outside the city, and when he meets up with Rail and Moa this interests her enough that Moa insists on taking him with them.

They end up on the run from the Protectorate, an army of soldiers hell-bent on keeping order in the chaotic city. Along with a ghetto boy named Finch, the leader of the Protectorate army intends to get the artifact and use it to access and destroy the Chaos Engine, source of the Probability Storms.

This book contains examples of..