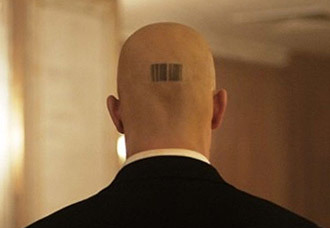 Attention, Kmart shoppers: we have a blue light special on badass...
Advertisement:

Simply put, the use of barcode tattoos in futuristic settings, particularly of the dystopian flavor. Maybe it's to mark them as being property of some Mega-Corp or a Nebulous Evil Organization. Maybe they're clones, slaves, or prisoners. Maybe it just looks cool. Whatever it is, barcode tattoos are appearing more and more often in fiction.

Most often these tattoos are on the nape of the neck, but they can be in other places, as the picture shows us.

This can be a Truth in Television: A lot of these people actually think that these tattoos look cool or badass. Anyone who's ever used an actual UPC scanner knows they sure aren't feasible; even minor printing errors render barcodes printed on paper, plastic or metal unscannable, and tattoos tend to dissipate with age. Even fresh ones would be distorted whenever skin is stretched by movement. Although this practice has seen a slight revival, now replacing barcodes with QR codes instead. Mainly thanks to the fact that phones scanning QR codes being widespread.note And it's not uncommon for some of these QR code tattoos to have some sort of punchline behind them.

A related trope in futures that are more Zeerust than dystopian is the barcode license plate, often an accompaniment to flying cars but seldom accompanied by the owner-applied markings on nearly every vehicle that would be necessary for owners of popular cars to find them in crowded parking lots without special equipment. No one explains why law enforcement doesn't object to license plates which human eyewitnesses to crimes can't possibly read. Real Life Automatic License Plate Readers have made barcode license plates unnecessary.