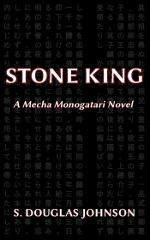 The Eschatos warrior had killed over a hundred Titan Corps pilots before, and seemed unstoppable. But this one titan pilot faced him against all odds. He managed to defeat the undefeatable Eschatos mecha with feats of brute strength unparalleled since the days when Benkei was still in the Show. All the talking-head analysts on the news were singing this titan pilot's praises. They talked about how impressive this was, how heroic he was, what a fine exemplar he was...They gave this pilot the title 'Ishio', the Stone King of Ibaraki.

It took me a while to realize they were talking about me.

Stone King: A Mecha Monogatari Novel is a science fiction novel written by S Douglas Johnson. It is set in a near-future Japan which is at war with the Eschatos, a loose alliance of other nations that continually send armies of mecha to attack Japan.

Japan's Ground Self-Defense Force has developed mecha of its own: the titans, twenty-meter-tall bipedal war machines. Built with control systems reverse-engineered from Eschatos designs, that can only be operated by a rare few, who are conscripted into the GSDF Titan Corps while in their early teens and continue to serve until they can no longer synchronize (link their minds to their titan's control systems), or until they die.

Stone King is told in autobiographical style, from the point of view of Saionji Kiyohiko, who was a JGSDF titan pilot until he lost the ability to synchronize. Looking back at his career in the Titan Corps, Saionji tells of his experiences during the invasion, occupation, and later liberation of Kyushu, where he came to be known as Ishio, the Stone King of Ibaraki.