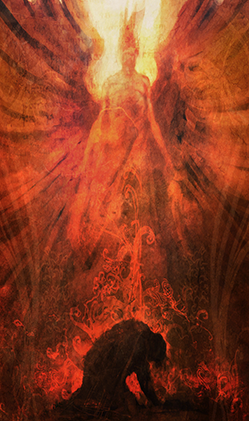 Many religions recognize beings that can be broadly termed angels, though their exact natures and traits vary. In the current age, these are often seen as not overly dissimilar from the souls of humans, allowing members of one kind to change into the other. As angels are increasingly portrayed as Winged Humanoids, the distinction becomes very fine.

In the canon of all Abrahamic religions (Judaism, Christianity and Islam), angels are a separate order of creation from humanity, generally regarded as composed of spirit or light. Though they can appear as humans if it suits them, they are unable to truly become human. Yet even in canon, angels are often envious of mortals, and many writers have mused on how one of them might become one of us. Similarly, in recent centuries, due to carelessness or wishful thinking, it's not uncommon to show characters in fiction becoming angels after death, especially if they were particularly saintlike in life.

Humans being elevated will often be given, along with robes and a harp, actual wings and a halo, as if these things were also garments and not inseparable parts of an angelic being. Conversely, an angel frequently rescinds its stature by ripping or cutting off its own wings, often leaving a pair of telltale stubs on their back.

An angel becoming a human is a case of Humanity Ensues. Conversely, human-to-angel is Ascend to a Higher Plane of Existence. Either transformation usually counts as Semi-Divine. It often overlaps with Winged Soul Flies Off at Death; however, note that that trope is a symbolic depiction of death and not always meant to suggest that the deceased has actually become an angel. See also Fallen Angel.