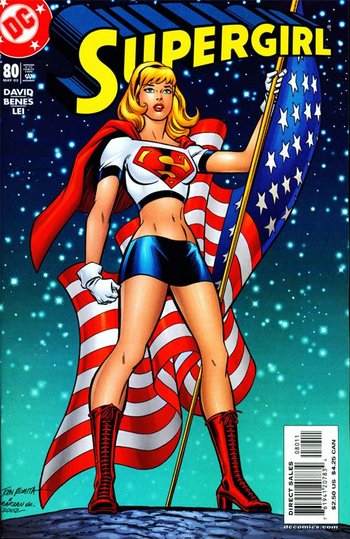 Supergirl (1996) -or Supergirl (Volume 4)- was Supergirl's fourth solo book and the last series to feature a non-Kryptonian Supergirl. It was written by Peter David from 1996 to 2003.

In the first issue, Matrix travels to the town of Leesburg and melds with a troubled human girl named Linda Danvers for the purpose of saving her life. The fusion of the two results in an "Earth-Born Angel", a holy being with powers of fire. From that point on, Linda Danvers would have to fight demons and other denizens of Hell in order to atone for her sins and crimes as a cultist.

In spite of gaining a loyal fanbase, the book sold poorly and DC axed the series after the Many Happy Returns Story Arc in which Linda Danvers was Put on a Bus. However, sales improved during the final storyline, suggesting that there was interest in the original Supergirl, so leading to the introduction of a new Kara Zor-El in The Supergirl from Krypton (2004).