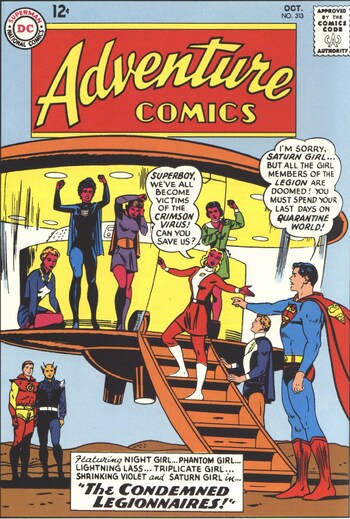 "The last minutes are fading...My life is ending! It would have been wonderful to live my own life...But it's over..."
Advertisement:

The Condemned Legionnaires is a Legion of Super-Heroes story published in Adventure Comics #313 (October, 1963). Created by Edmond Hamilton and Curt Swan, it provided one of the few Supergirl recurring rogues, and it was reimagined in Girl Power and other stories.

The female Legionnaires -Saturn Girl, Lightning Lass, Triplicate Girl, Shrinking Violet, Night Girl- have fallen sick and been sent to a quarantine world. While their male teammates are trying to come up with ways to cure them, an enigmatic masked figure called Satan Girl introduces herself and announces she has come to replace the Legionnaire girls.

When the Legion turn her down, Satan Girl reveals she was the one who caused the sickness affecting the Legion girls, and since she has been rejected, she will just kill them in payback. Before the Legionnaires can stop her, Satan Girl wrecks their ship and takes off, revealing her very versatile powerset. Superboy and Mon-El are off on a mission, so the Legionnaires ask Supergirl to help.

Supergirl makes it to the quarantine world just in time to stop Satan Girl from finishing her female teammates off. When fighting Satan Girl, though, Supergirl learns several disturbing facts: the masked villainess is just as powerful as her but has zero weaknesses; she knows all of Supergirl's secrets; and, for some reason, she hates Kara more than anybody and anything in the world.

Satan Girl would become the forefather of all Supergirl's evil twins, as well as one of her few recurring villains, being reinvented in her Supergirl (2005) book and referenced in modern DC media as the Justice League Action episode "Speed Demon".