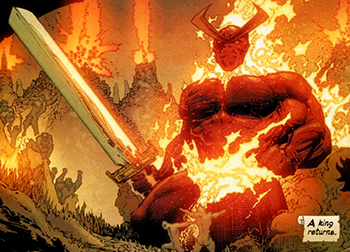 "The medley of burning flesh and metal. How sweet is that aroma! Some call it pain and chaos, but it is progress plain and simple. I know you are not yet ready to appreciate it. I know it is frightening. You must burn away those parts of yourself that cannot love the smell of progress. Burn them utterly and savour the stench. All my followers do. It makes them strong. It makes them make me strong. If Pyro did not bring them progress, they would cast him aside and find a new god. That is as it should be."
— The Book of Pyro, Sacrifice
Advertisement:

A God of Fire is a Stock God who commands fire and/or volcanoes. Their position in the pantheon food chain varies; sometimes they might be the Top God (this is usually the case if they are also a Sun God), one of several high-ranking gods or a mid to low-tier deity.

In regards to temperament, fire deities are likely to be as volatile as the element they command. However, it is also possible for them to be portrayed as kind, gentle and nurturing, reflecting how fire provides warmth during the cold and light in darkness. Some fire gods may also play a hand in the development of civilization by teaching humans how to utilize fire for their needs or may even be the ones who created humanity.

In terms of aesthetic, a God of Fire is likely to have Flaming Hair or be totally Wreathed in Flames. They may also be Living Lava. May overlap with Appease the Volcano God or Chekhov's Volcano, though not all such volcano gods are gods of fire or volcanoes in general. A God of Fire may also share a pantheon with a Lord of the Ocean — in which case, expect an Elemental Rivalry and some Fire/Water Juxtaposition.

A God of Fire's worldview and morality can cause this trope to overlap with various others. They may be a very specific and powerful example of an Elemental Embodiment. Some fire gods might be The Maker or the Ultimate Blacksmith, using fire to fill the world with life or to sponsor metalwork and industry. Others might play up the destructive aspects of fire and serve as a Destroyer Deity. Good fire gods will likely be a source of Sacred Flames and use fire to purify, while evil gods are likely to be an example of Evil Is Burning Hot, and may even go so far as to be a Satanic Archetype, a master of Hellfire and/or the ruler of a Fire and Brimstone Hell.