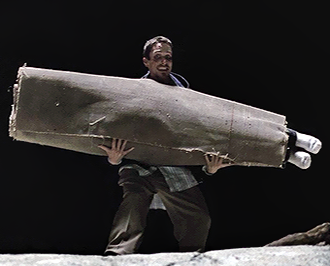 Up for a shag?
"I shall fetch a rug!"
— Woodhouse, Archer
Advertisement:

A classic method for murderers, kidnappers or smugglers to covertly transport a human body, dead or alive, is to lay it out on a carpet and roll it up inside. It's quick, tidy, and comparatively innocuous; unlike blankets, a rolled carpet does not sag or fold out of shape, and it's unlikely to seep fluids like normal cloth or tear as plastic bags can.

If used with a dead body, this trope allows a killer to carry off any evidence on the rug along with the corpse. With a living kidnap victim, they're restrained by the thick material and their cries are muffled; while suffocation is a risk, it can be made less likely if the carpet's ends are left uncovered (although pressure on the chest still poses a breathing hazard). Either way, a rolled-up carpet remains one of the few heavy cylindrical objects that can be hauled around in public without attracting much attention.

Out-of-character, this trope was first popularized in the theater, where it let an actor be discreetly carried off-stage after their death scene, rather than hauled off in full view and at risk of Corpsing.

Subtrope of Disposing of a Body, and one standard technique for a Cleanup Crew. Sister trope to Bag of Kidnapping if the body in transit is a living captive. Rarely, a person might arrange to have this trope applied to themselves, possibly as a Trojan Horse. If someone decides to use a carpet rolled corpse as a weapon, this is Grievous Harm with a Body.

Often a Death Trope, so unmarked spoilers may follow.