When the Clock Strikes Twelve 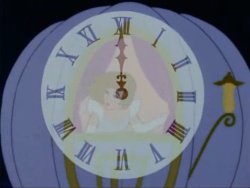 "Oh, that clock! Old killjoy!"
"Why is it always midnight?"
— Shrek, Shrek 2
Advertisement:

A lot of times, when there's a deadline to something, it's usually midnight. Why? Maybe because it's the time when the day officially ends, or just because the twelve chimes are really dramatic. Either way, things will happen When The Clock Strikes Twelve. How this interacts with timezones and Daylight Saving Time is generally left unmentioned.

If there's an actual clock involved, the actual deadline will almost always be when the last stroke ends, even though chiming clocks in Real Life are set to start striking when the top of the hour hits. (If the deadline is supernatural, the effect will usually begin happening with the first stroke and end with the last, sometimes step-by-step with each stroke.) This serves the Rule of Drama, especially if time can be magically stopped, slowed or reversed to give the characters more time before the twelfth stroke. (A clock that strikes more than twelve will usually be recognized as broken.)

Midnight is also probably the most significant hour of the day for the supernatural — in other words, Midnight Is Magic. Ghosts, magical creatures etc. all set their clock by it; typically the time between sundown and midnight is when they are free to roam the Earth. Or it can be from midnight to dawn. Another famous variant is known as "the Witching Hour", a general concept that magic and supernatural is at its strongest around midnight through 1 a.m. For an extremely limited period, the time might be between the first stroke and the twelfth, regarded as a Liminal Time between the days, not in them.

Note that if a myth about midnight events pre-dates the widespread use of clocks, then the "midnight" it refers to is most likely not instantaneous, but simply indicates the middle part of a night.

On the opposite end, many types of magic wear off at midnight. See also Celestial Deadline, When the Planets Align.

Doomsday Clock is a subtrope specifically dealing with global catastrophe of some sort. May overlap with Death's Hourglass. See also Right on the Tick and Exact Time to Failure.

Older Than Steam, but heading toward being a Dead Horse Trope as it appears more in subversions and aversions now.

Cinderella forgot to mind her own time and the Fairy Godmother's warning that the magic ends at midnight, prompting a mad chase to get home before the final bong.

Cinderella forgot to mind her own time and the Fairy Godmother's warning that the magic ends at midnight, prompting a mad chase to get home before the final bong.