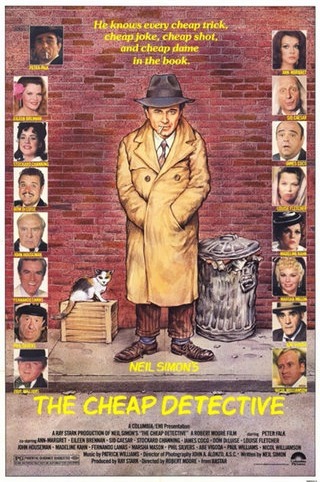 The Cheap Detective is a 1978 American comedy-mystery film written by Neil Simon and directed by Robert Moore. It is a follow-up and Spiritual Sequel to Simon and Moore's earlier film, Murder by Death.

The film is an Affectionate Parody of Humphrey Bogart movies such as The Maltese Falcon and Casablanca, but manages to get a few shots in at the Film Noir genre in general. Peter Falk stars as Lou Peckinpaugh, a detective in the Sam Spade mold. As with Murder by Death, there's no shortage of comedic icons to share the spotlight.

Floyd Merkle, Private Eye, is found dead— killed so abruptly that he didn't even have time to fall down. It's up to his partner, Lou, to solve Merkle's last case, prove his own innocence, outwit the Nazis, and find the greatest lost treasure of all time— all while dealing with the strangest people ever to loiter on a San Francisco street on a dark, rainy night...