Film / The Case of the Curious Bride 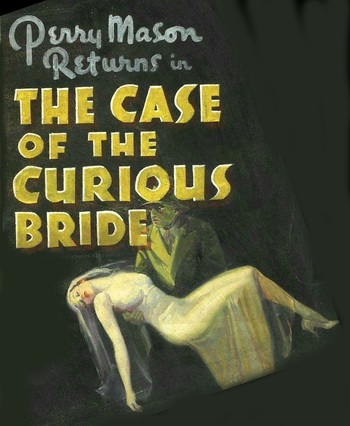 The Case of the Curious Bride is the fifth Perry Mason Mystery novel written by Erle Stanley Gardner, published in 1934. In 1935, it was adapted into a film directed by Michael Curtiz. It is the second of eight films made by Warner Bros., the first four of which all starred Warren William.

Perry, having just won a big case, is about to go off on a vacation to China when he's approached by Rhoda, an old girlfriend. Rhoda has recently married Carl Montaine, scion of the wealthy Montaine family. Soon after this happened she received a communication from Gregory Moxley, her first husband, who was believed to have died five years ago. Perry looks into it and soon discovers that while Moxley faked his death five years ago, he is freshly dead now, having been murdered in his apartment. Perry then takes it up on himself to get Rhoda off the hook.

Best remembered for being the American film debut of young Australian actor Errol Flynn. Flynn appears only briefly in a flashback scene as Gregory Moxley, murder victim. Soon after this picture Flynn rocketed to super-stardom with Captain Blood.