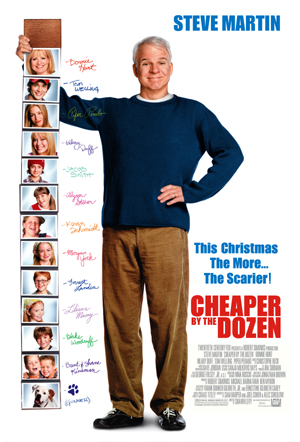 The more the scarier!
"Sarah, your suspension from lacrosse for excessive force has been lifted, so you're going today... Henry, you have band practice, all right? I cleaned your clarinet. Please don't play with your food in your mouth again. Kim and Jessica, your teacher called and has made a request that you do not correct her in front of the class. Mike, you have show-and-tell today. And please, honey, remember that body parts do not count. Kyle and Nigel, you have a dentist appointment at 3:00, so you're going to work with Dad."
— Kate Baker (bear in mind this covers barely half the kids)
Advertisement:

Cheaper by the Dozen is a 2003 film starring Steve Martin about him, his wife and their twelve kids. Count 'em, twelve. It was directed by Shawn Levy.

Plotwise, the family is happy, but packs up and moves an unspecified distance from a small town into the suburbs of Chicago so the Dad can pick up his dream job coaching his old college football team. The kids are variously disappointed by this, but grudgingly go along with it anyway. Having left home, the family gets another shock - Mom's gonna get her book published! Mom goes on a book tour, leaving the family in her husband's hands for a few days. Hilarity Ensues as total chaos erupts. One kid runs away, the family chases him down (leading to a nice You Are Not Alone moment), Dad realizes what his job has done to his kids and both he and his wife resolve to put family first.

A remake starring Zach Braff and Gabrielle Union debuted on Disney+ on March 18, 2022.