Literature / Cheaper by the Dozen 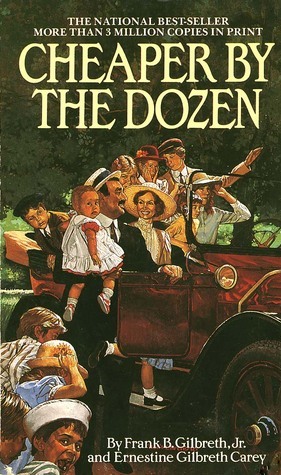 Cheaper By the Dozen (1948), written by Frank Gilbreth, Jr., and Ernestine Gilbreth Carey, is the hysterical tale of the Gilbreth family — Dad, a 'motion study' engineer who always believed in bringing his work ideas home; Mother, a calm psychologist; and their dozen children: Anne, Mary, Ernestine, Martha, Frank, Bill, Lill, Fred, Dan, Jack, Bob, and Jane. The book, set in 1920s New Jersey, details the events which occurred during the childhood of the titular dozen, up until the point that their father passed away.

It was followed up by Belles on Their Toes, which chronicled the adventures of the family as they are raised by widow Lillian Moller Gilbreth. The two books were adapted to film in 1950 and 1952, respectively; an In Name Only film was released in 2003.

Cheaper By the Dozen contains examples of: