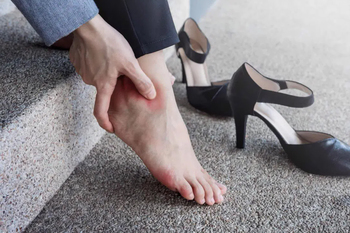 As stylish and svelte as it may seem, fashion hurts, and women pay for it dearly.
Feet bear the brunt of daily life, and for many workers prolonged standing, badly fitted footwear, and in particular high heels can be a hazard. Around two million days a year are lost through sickness as a result of lower limb disorders.
— 2009 motion from the Society of Chiropodists and Podiatrists to the Trade Union Congress
Advertisement:

What's not to love about high heels? They're stylish, they make you taller, they shape the legs and produce a unique stride.

This character will see them as a tremendous pain in the ass. It's easy to stumble, the heel snaps like a twig, they make your back, legs, and feet sore, and good luck dancing or walking for long periods of time in them.

This trope is when high heels are treated as cumbersome or unpleasant and more trouble than they're worth. This can be either through the characters openly complaining about wearing heels or by showing characters being obviously encumbered by them. It is often Played for Laughs.

Any show about men dressing up in drag for the first time is guaranteed to bring this up in a not-so-subtle message about walking a mile in a woman's shoes. This trope can also show up as part of a tomboy's Femininity Failure. Subtrope of Fashion Hurts and Agony of the Feet, and sister trope to Of Corset Hurts. Varying Truth in Television.