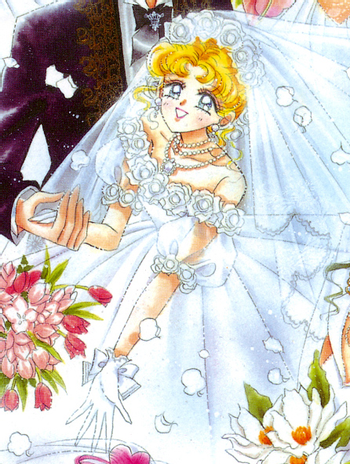 A gown as lovely as one made by a Fairy Godmother.
It’s not a coincidence that all the princesses you’ve read about all got married in a beautiful ball gown wedding dress. This is an elegant bridal design that instantly makes you feel gorgeous and truly flatters your unique shape in all the right places.
— 9 BALL GOWN WEDDING DRESSES YOU ARE SURE TO LOVE

The main reason for such dresses (and perhaps the key to this trope over any other wedding dress) is the notion that many women like to "feel like a Princess" on their wedding day (even if she is already royalty), and wearing such a dress is at least one way to carry out that wish. She's probably had this desire ever since she was a small child in her Princess Phase. Back then she probably had everything planned out, except for who the groom was, maybe.

And this kind of dress is Truth in Television, as any Bridal Magazine will show loads of these, at least as much as the modest and sensible dresses.

Sometimes it doesn't even have to be worn at a wedding. It can show up in a bridal Fashion Show, or be one of several dresses a character tries on for her wedding (often a dress that she turns down due to either cost or it genuinely not being the kind of dress she wants). Or, more subversively, a burlesque dancer or Drag Queen may appear in a wedding dress as part of a performance—often to poke fun at old-fashioned ideas that a bride has to be modest or virginal (or female) to make a good spouse.

When it is a wedding, this tends to be worn by younger women. Older women are usually seen as not being so naive about how wedding should go (even if they aren't above romance).

Now as the name indicates, this dress is likely to show up at the end of some Fairy Tales—or at least modern works of them. (Genuine folk fairy tales tend to skip over the sartorial details to lavish attention on the villain's horrific death. Illustrated versions may show it, though.)

It isn't immune to being Impossibly Tacky Clothes if either the bride has little taste or she is forced to wear such a dress. It also isn't immune from being Doomed New Clothes or a Blood-Splattered Wedding Dress, unless it's a live action work and the dress is too expensive to wreck.

Name comes from the term "fairytale wedding", which is meant to evoke old-fashioned grandeur and elegance (look for the newlyweds to leave in a horse drawn carriage), which includes the dress, and is quite popular in Weddings in Japan.

It can overlap with Ethereal White Dress if the white dress she wears all the time is her wedding dress (often when widowed). May also be worn by a Wight in a Wedding Dress.

A Sub-Trope of Pimped-Out Dress.

Note: Since this involves weddings, some of these entries will be spoilers. You Have Been Warned.