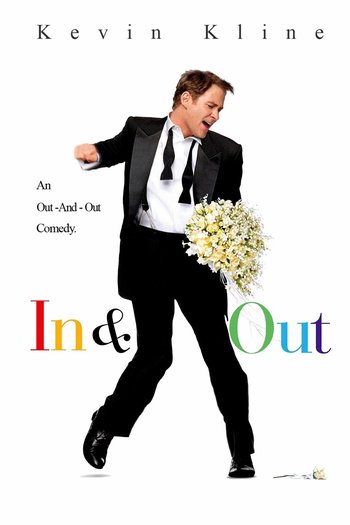 "We had a gay teacher! We must face up to that, and move on with our lives."
Advertisement:

A 1997 film directed by Frank Oz, which deals with homosexuality with some degree of fairness, despite occasionally leaning back on stereotypes for its characters — all done knowingly, and all with tongue firmly planted in cheek, as the movie is, at its heart, a satire where many elements are exaggerated for comedic effect.

Howard Brackett (Kevin Kline), a high school English teacher in the "BIG small town" of Greenleaf, Indiana, is preparing for his marriage to his fiancée of three years, Emily Montgomery (Joan Cusack), while the whole town is abuzz with the news that hometown boy turned Hollywood megastar Cameron Drake (Matt Dillon) is nominated to win Best Actor at the Academy Awards for his performance in a war film as a gay soldier. Accordingly, the whole town is watching as Drake wins the Oscar and dedicates his award to Howard — outing him as gay in the process.

Within hours, Howard is beset by camera crews and reporters eager to get their slice of the story — including Peter Molloy (Tom Selleck), a reporter for an entertainment gossip show. Howard insists that he's not gay and that Cameron was mistaken. However, the openly gay Molloy isn't convinced, and settles in to cover the days leading up to Howard's wedding because he suspects denial. Thus Howard finds himself under tremendous pressure from Emily, his parents, and the school's principal (Bob Newhart) to assert his heterosexuality, but when even he starts questioning himself, he has to face the truth...