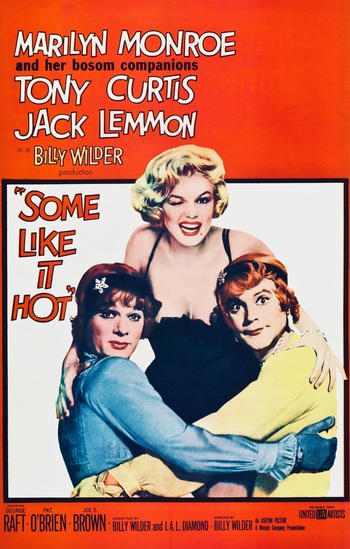 Some Like It Hot is a 1959 comedy film directed by Billy Wilder, who also wrote the screenplay along with frequent collaborator I. A. L. Diamond.

Chicago, 1929: Joe (Tony Curtis) and Jerry (Jack Lemmon) are down-on-their-luck jazz musicians who become accidental witnesses to a shooting similar to the St. Valentine's Day Massacre, perpetrated by mob boss "Spats" Columbo (George Raft). Unfortunately, being witnesses to a massacre is something the mob will kill people over, and Joe and Jerry have been spotted, so they need to get out of Chicago fast.

It so happens that an all-girl band, which is leaving town by train, has openings for a bass player and a tenor saxophonist. This does mean that Joe and Jerry will have to pretend to be women, but they consider this better than dying. Donning makeup, wigs, and dresses, they introduce themselves as Josephine and Daphne (Jerry prefers that to Geraldine).

The lead singer of the band is called Sugar, and she is beautiful (Marilyn Monroe!). She also has a weakness for tenor saxophonists, which is why her current band is girls only (she thinks). Sugar takes the new "girls" into her confidence, and Joe and Jerry both need reminding that they're incognito and not looking for trouble.

The train ends up in Miami, where the band has a gig in a hotel. Sugar expresses the desire to be romanced by a millionaire, and Joe decides to take up another ID as a (male) millionaire to court her. Meanwhile, real millionaire Osgood Fielding III (Joe E. Brown) is courting "Daphne", and Jerry is starting to like it for more than the presents... which is unfortunate, since he's still a guy biologically. The coup de grâce comes when Joe and Jerry learn that the hotel is booked for a friends of Italian opera convention... attended by "Spats" Colombo and his gang, the very mobsters they fled Chicago to escape.

Adapted as a stage musical, Sugar, in 1972. This was revived 20 years later as Some Like It Hot: The Musical, with Tony Curtis (this time playing Osgood) headlining the cast.

Osgood is unfazed by the reasons "Daphne" gives for why "she" can't marry him.

Osgood is unfazed by the reasons "Daphne" gives for why "she" can't marry him.