Film / Love in the Afternoon 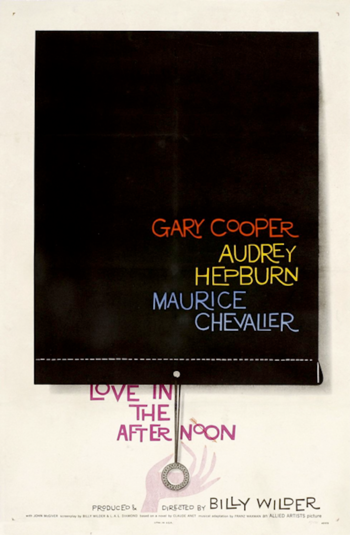 Love in the Afternoon is a 1957 Romantic Comedy film adapted from the 1920 novel Ariane, jeune fille russe by Claude Anet, directed by Billy Wilder and starring Gary Cooper, Audrey Hepburn and Maurice Chevalier.

Set in Paris, the film involves Ariane Chavasse (Hepburn), a young music student and the daughter of private detective Claude Chavasse (Chevalier), who is investigating the trysts of American businessman Frank Flannagan (Cooper). Upon learning that a jealous husband is about to shoot Flannagan, Ariane attempts to warn him personally, leading to a budding relationship between the two.

Mostly acknowledged to be Wilder working In the Style of... one of his filmmaking mentors, Ernst Lubitsch. This was also Wilder's first collaboration with screenwriter I. A. L. Diamond; the pair would work together on ten more films, including such classics as Some Like It Hot and The Apartment.

Not to be confused with the last of Éric Rohmer's Six Moral Tales.