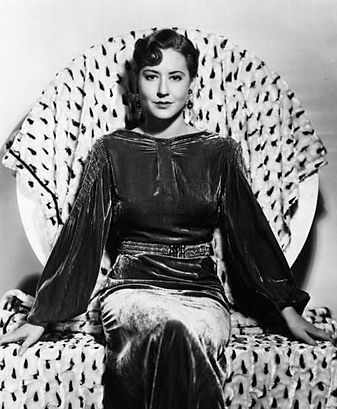 "When I was a little girl, I decided I wanted to be an actress. They told me it would bring me lots of heartbreaks, but I didn’t care; I knew what I wanted."
Advertisement:

Mae Clarke (Violet Mary Klotz; August 16, 1910 – April 29, 1992) was an American actress known for her appearances in films in The Pre-Code Era. She was also in a few Universal Horror movies and then later made uncredited appearances in The Golden Age of Hollywood.

Clarke came from a family that was half musical theatre; her father was an organist. She studied dancing as a child and began on stage in vaudeville and also worked in nightclubs. She was a dancer first and then appeared in films for Universal Studios, particularly in their horror cinematic universe. Much of her career was throughout the early 1930s, but her leading lady status was cut short in 1933 when she and fellow actor Phillips Holmes had a car accident, which broke her jaw and gave her scars on her face.

Clarke's career resorted to relying on bit parts, often cameoing in movies that one wouldn't expect to see her in, considering she was most known for her roles in horror and "raunchy" pre-Code movies, such as the woman into whose face James Cagney shoved a grapefruit in The Public Enemy (1931). She later acted on television, in series such as Batman (1966) and General Hospital, before retiring in the 1970s to become a drama teacher.

She died of cancer at 81 years old.