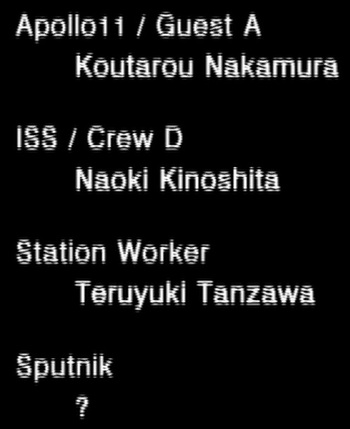 The seiyu for Sputnik is not credited.
Advertisement:

For a variety of reasons (budget constraints, contractual obligations, Creator Backlash etc.), sometimes a person will be involved in the creation of a work, but will go uncredited. It's generally only noteworthy if they played a significant role in the creative process (playing a major character, drafting a screenplay, writing a lyric); if the person is well-known enough to have a page on this wiki (many Cameos meet this description); or if the role they played was insignificant, but the person went on to achieve greater fame thereafter.note If we were to list every person who was involved in the work but went uncredited, this page would balloon to tens of thousands of words simply because of the hundreds of uncredited extras who appear in Hollywood films.

In Hollywood, experienced screenwriters are often employed as uncredited "script doctors" to provide edits to existing drafts of screenplays before they go into production: these edits can range from simple punching up of the dialogue, to adding new scenes, to changing the entire structure of the screenplay.

In literature, writers may be employed as "ghostwriters" note Not to be confused with the series or film of the same name. to write a book for another person: the latter person will be credited as the writer. The most common form this takes is when a celebrity hires a ghostwriter to pen their "auto"biography. The ghostwriter is usually bound to a non-disclosure agreement not to publicly reveal or discuss their involvement in the creation of the book, although they may be credited as an "editor" or "consultant" (in which case it's not an example of this trope). House Pseudonym (in which multiple ghostwriters are credited under a single pseudonym) is related to this trope.

In music, it's common for solo artists or groups to employ "session musicians" when recording a song or an album: contracted musicians who will perform on one or more tracks, but who are not considered an official member of the group or the solo artist's backing band. Sometimes these musicians will not be credited in the liner notes for the release, but will later go on to achieve fame in their own right. In Hip-Hop, it's an Open Secret that many rappers employ ghostwriters to write lyrics for them, who will unusually go uncredited to preserve the Kayfabe that the rapper exclusively writes their own material (this is quite different from pop music, in which songwriters usually receive credit independent of the performer). Music producers will also sometimes serve as "ghost producers" for various reasons. Also, it's not unheard of to decline credit to a featured artist on a duet or guest appearance, if the featured artist is on a different label and cannot secure promotion rights.

This was common industry practice in voiceover work for animation prior to the 1980s (see Now Which One Was That Voice? for more information).

See also Alan Smithee, for when a film director proves that they did not have creative control over a film and has the direction of the film credited to a pseudonym. An interesting case is when a creator is typecast in a particular role/genre, and goes uncredited in order to distance themselves from their usual type, which overlaps with He Also Did.

Note that it's not an example if the person is credited under a Pen Name or alias, or if they're Not Named in Opening Credits but still credited at the end. Sometimes creators will deliberately go uncredited so that their part in the work will be a surprise for the audience, so some examples on this page will be spoilers.