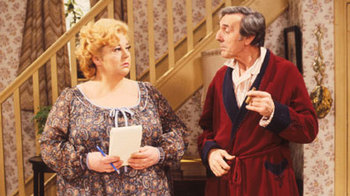 A BBC sitcom that ran from 1972 to 1979 and which was preceded by the now largely lost due to "junking" Sykes and a.... (1960 - 1965) and Sykes and A Big, Big Show. Each features the eponymous Eric Sykes, played by Eric Sykes and Hattie "Hat" Sykes played by Hattie Jacques.

Sykes and Jacques play a pair of twins who insist they are identical twins despite not only being the opposite sex, but also looking nothing alike (Eric is tall, thin and rakish, Hat is short pleasantly large and baby faced) who live together in a modest house, on modest Sebastopol Terrace, in modest Middle England. Eric is reluctant to find any form of work, something Hat bemoans at times as she is the sensible one... but he'd rather try his hand at Get Rich Quick Schemes like buying a local truckers' greasy spoon and run it cheap like the truckers like and cream off the profits.

They live next door to the snobby Charles Fulbright-Brown (Richard Wattis), a name-dropper and social climber who considers himself superior to the more working class Sykes twins despite being more or less in the same social stratum. They pretty much get along despite both the twins and Mr. Brown taking pot shots at each other.

The other main reoccurring character is local bobby-on-the-beat, Police Constable Corky Turnbull (Deryck Guyler). He seems to be more tolerated by Hat than by Eric, and is more of an innocent than the rest of the cast, although this doesn't stop him from picking up on and trying to put a stop to the more illegal variations on Eric's hairbrained schemes.

One more recurring "character" in the show is Hat's beloved cuckoo clock "Peter". The clock seems to have a mind of its own and cuckoos whenever it feels like it, often apparently in response to one of Eric's sillier utterances. Eric frequently aims snarky comments at the clock, which causes Hat to console it and berate Eric for being so cruel to it.

The first season was released on DVD in 2004, with a complete box set finally appearing in 2017.