Film / Fun with Dick and Jane 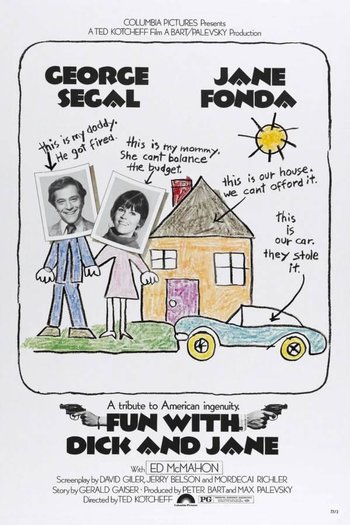 Fun with Dick and Jane is a 1977 satirical comedy film directed by Ted Kotcheff, starring George Segal and Jane Fonda as the title characters.

Dick and Jane Harper are married yuppies in suburban Los Angeles. He's an aerospace engineer, while she's a dedicated homemaker. Dick makes a handsome salary, and both of them spend it as fast as possible (one of Dick's lunches costs a thousand dollars). Dick knows all his colleagues are engaged in bribery, but he's honest enough not to break the law himself. Both Dick and Jane are quite happy.

Unfortunately, Dick and Jane are idiots, and they're spending far beyond even their extensive means. They've borrowed against their house and insurance, taken all the money out of their bank account, and still have more they wish to buy. But aerospace engineering is in a decline, and Dick is about to be fired. Off to the food stamp line with them!

Until Jane sees a loan office robbed, and realizes just how easy crime can be...

The film was remade in 2005 with Dean Parisot directing, Judd Apatow co-writing the screenplay, and Jim Carrey and Téa Leoni in the title roles.

In this version, set in 2000 at the height of web-based businesses, Dick is an employee of one such called Globodyne while his wife works at a travel agency. They live moderately well with their son and a Hispanic housemaid. One day Dick gets promoted to head of VP communications of the company. He tells Jane about it along with making the suggestion to quit her job with their supposed increase in money. However, the next day as Dick does an interview on a stock-based TV show, he realizes he's been made the scapegoat for the financial failings of the company which he, of course, didn't know about. Globodyne goes under in less than a day and the employees were laid off including Dick. What's more, Jane took his advice and quit meaning both are now jobless. With the recession of companies going under, Dick can't get another job similar to his old one, and Jane and he are forced into trying minimum wage work.

After one misadventure after another and having to either trade or give away most of their luxuries. Dick, fed up, "steals" back their lawn (as before he was laid off was getting new grass for his house), giving him a small victory in his struggle. But it doesn't last as he soon gets an eviction notice. Desperate times call for desperate measures and Dick set out to gain money, illegally. After inadvertently getting Jane caught up in the theft, the two realize they like the rush and thus their crime spree begins.

Was met with mixed reviews but did moderately well at the box office.

The movies have the following tropes