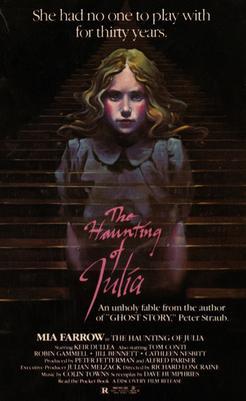 Full Circle, also called The Haunting of Julia, is a 1977 British-Canadian horror movie/psychological thriller starring Mia Farrow. Based on the 1975 novel Julia by prolific author Peter Straub, the film follows Julia Lofting, who accidentally kills her daughter while attempting a tracheotomy to save her from choking to death. Deeply disturbed by the incident, she leaves her husband and moves into a house of her own. Soon, she begins to see visions of a little girl resembling her dead child. Meanwhile, seemingly supernatural events begin to suggest to her that her new house is haunted. Or is she just crazy with guilt?

Though it wasn't a box-office success, it has developed a slight cult following and is notable for being the first film adaptation of one of Peter Straub's works.