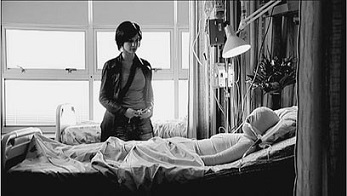 A young girl goes through life squatting apartments in Tel-Aviv, selling drugs for a man known as ‘Schultzi’, and chatting in chatrooms for fun using the name ‘Meow’. After her motorcycle is stolen, she arranges a meeting with a man named Alex Kaplan she chats with; after some stumbling, she gets him to meet her at a club she sells her product at, but, this being the Second Intifada, the club is bombed before they can meet.

Having taken his keys from his apartment earlier, she moves into his apartment, slowly assuming his identity and avoiding having her true identity revealed. Slowly but surely, weirder and weirder things start happening to her as a result...

The film was nominated for two Ophir Awards

for Best Actress (for Anat Klausner who played Meow) and Best Shooting, and one the Best Feature Film in the 2005 Haifa Film Festival. Klausner co-won (with actress Asi Levi) the Best Actress award as well.