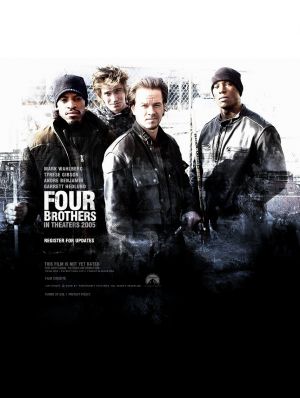 They came home to bury mom... and her killer.
Advertisement:

A 2005 crime thriller directed by John Singleton and loosely adapted from the 1965 Western The Sons of Katie Elder, Four Brothers is a 2005 movie about what happens when beloved Detroit citizen Evelyn Mercer is murdered in a store heist.

Her four dangerous adoptive sons come to her funeral: Bobby Mercer (Mark Wahlberg), Angel Mercer (Tyrese Gibson), and Jack Mercer (Garrett Hedlund) join the regenerated ex-union leader, Jeremiah Mercer (André 3000). They decide to investigate the murder, discover that her execution was intentional, and resolve to find the criminals by themselves.