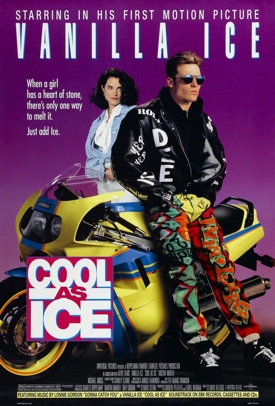 "In the house, and the house is packed."
"When a girl has a heart of stone, there's only one way to melt it. Just add ice."
Advertisement:

A very strange 1991 film starring Vanilla Ice. The director is David Kellogg, whose directorial, er, "style" would be repeated in Inspector Gadget.

The film is a good old-fashioned teen rebel flick, fashioned to fit into the strange window of time that was the early 1990s hip-hop scene. Ice plays Johnny Van Owen, the leader of a hip hop/dance crew/biker gang/who knows, who are passing through a small, predominately white, conservative town. One of their bikes goes on the fritz, but as luck would have it, they run across a kooky old couple who offer to fix it, and even let them stay for a few days. What does Johnny do with all this free time? Scope out the pretty honors student down the street (Kristen Minter) and put the moves on her of course, her steady boyfriend be damned.

Originally she's repulsed by his approach (probably because their Meet Cute involves Johnny accidentally knocking her off a horse), but before long, she finds his Improbable Hairstyle and 1991 catchphrases irresistible, much to her boyfriend's consternation. Along the way, he finds time to help some nerdy white people get their groove on at a local club, and have a Falling-in-Love Montage at a construction site. But things start going sideways, as it turns out her family is in hiding from bad guys (don't expect this to be adequately explained). Her father (Michael Gross) assumes Johnny is one of them just because... well, just because he is Vanilla Ice, basically. This culminates in a Hostage Situation with Kathy's little brother.

But Ice- sorry, Johnny, eventually saves the day and all is well in the end.

The film sunk at the box office, grossing one-sixth of its budget, and Ice's performance was critically panned. That said, the fault can't entirely be pinned on the movie itself, as Ice's reputation had fallen hard before the film was even released due to various controversies. That hasn't stopped the film itself from becoming one of the stranger 90s artifacts.

Naomi Campbell makes a cameo in the opening credits.

Now has a character sheet, under construction.

"Oh yeah, Kat! Words of wisdom: drop that zero and get with the hero."