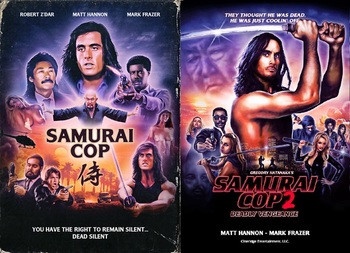 "His real name is Joe Marshall. They call him Samurai. He speaks fluent Japanese. He got his martial arts training from the masters in Japan and was brought over here from the police force in San Diego to fight us."
— Yamashita
Advertisement:

Samurai Cop is a 1991 action film starring Matt Hannon, Robert Z'Dar, and Mark Frazer. It was written and directed by Amir Shervan.

When the fearsome crime syndicate known as the Katana surfaces in LA, the only man with any hope of stopping them is Joe Marshall (Hannon), also known as "Samurai" for his incredible martial arts skill and swordsmanship. With the help of his partner, the streetwise Frank Washington (Frazer), and their superior, the hardened Captain Kohmer (Dale Cummings), the duo traverses the criminal underbelly of LA to hunt down the Katana's leader, a man named Fujiyama (Cranston Komuro). However, before Joe can stop Fujiyama, he'll have to face his right-hand man, the monstrous Yamashita (Z'Dar), a hulking brute whose martial arts prowess matches Joe's own.

scene was uploaded to YouTube in 2007 by user AkumuHau.

By the time the clip was uploaded, Amir Shervan had passed away of natural causes and both Matt Hannon and Mark Frazer had quit the business. While the Polish VHS was readily available, the film itself gave little information other than Z'Dar's involvement. It wasn't until 2010 when Gregory Hatanaka found a print stored in a vault in Los Angeles when a proper DVD was released with audio commentary from Joe Bob Briggs and an interview with Robert Z'Dar that some light was finally shed upon the mysterious film, although Matt Hannon and Mark Frazier were still nowhere to be found.

In late 2012, fans of the movie found that a Matt Hannon had passed away recently on IMDb, and thought it was the same Matt Hannon from the obscure film. A year later, when the proper DVD release was being screened at festivals, Mark Frazer reappeared and rumors of a possible sequel, helmed and directed by Hatanaka and starring Mark Frazier, began circulating. While at this point most questions had already been answered to most hardcore fans, several still remained surrounding Matt Hannon. Then in June 2014, star Matt Hannon miraculously announced that he was still alive amidst the evidence and rumors of his death in 2012.

Following Matt Hannon's announcement, interest for the sequel grew and Hannon was quickly cast as the star of the sequel. In the following weeks, in order to raise awareness for the Kickstarter campaign, Matt Hannon gave several interviews where most of the movie's biggest mysteries were finally solved.

Today, the film is a Cult Classic, known for its colorful cinematic style, and inspiring a music video

. Despite it never getting a theatrical release in its initial run, nowadays it gets screenings in L.A., New York and other cities across the U.S. With enough support and love from the fans through Kickstarter and Indiegogo, a sequel was released in October 2015, called Samurai Cop 2: Deadly Vengeance

, which stars Matt Hannon (credited as Matthew Keredas in the movie) and Mark Frazer in their original roles, as well as some returning favorites Gerald Okamura, Cranston Komuro, and Melissa Moore. Janis Farley appears in archival footage of the first movie. Dale Cummings, the original police chief tragically passed away in 2005. Robert Z'Dar also tragically passed away before any of his scenes were shot while in production of Samurai Cop 2.

In 2017, Amazon pulled Samurai Cop 2 from their streaming service since they didn't like the nudity, so director Gregory Hanakata re-cut the film, removing the nudity and replacing it with Tommy Wiseau footage and weird and frantic camera movements

. This version is called ''Revenge of the Samurai''

, according to Matt Hannon Samurai Cop 3 is possible, but unlikely.

The Sequel contains examples of the following tropes:

I Want His Head on This Piano!

"I will bring you his head, and I will place it on your piano."

Example of:
Demanding Their Head

I Want His Head on This Piano!

"I will bring you his head, and I will place it on your piano."