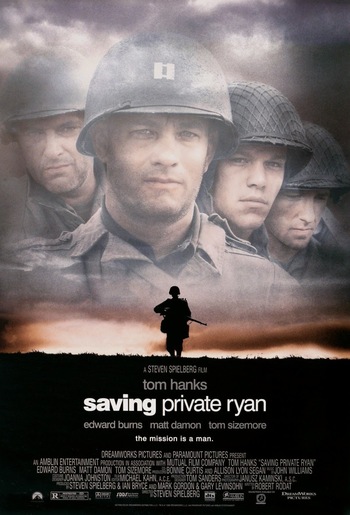 "Someday we might look back on this and decide that saving Private Ryan was the one decent thing we were able to pull out of this whole godawful, shitty mess. Like you said, Captain, maybe we do that, we all earn the right to go home.''
— Sgt. Horvath
Advertisement:

The film's setting is World War II, beginning with D-Day — namely, Omaha Beach, where "hell's doors were open" and Allied soldiers faced the first waves of Nazi resistance. There, a company of the U.S. Army's 2nd Ranger Battalion headed by Capt. John Miller (Hanks) slowly penetrates the German defenses leading to a breakout from the beach.

After the Omaha Beach invasion, General George C. Marshall receives the news that three brothers with the last name "Ryan" have all died in combat — two during the Normandy landing, the third in the Pacific — and the location of the fourth, who dropped into France as a paratrooper, is unknown. Miller receives orders to search for the fourth and last Ryan (Damon) so that Ryan can be sent home, and he quickly assembles a small squad to carry out the task.

After going through many French cities and losing two men, Miller's unit finally finds Ryan — but there's a problem: Ryan is with a small group of soldiers who have been ordered to protect a bridge from the Germans, and he steadfastly refuses to leave behind "the only brothers" he has left. Outnumbered and outgunned by advancing German forces, Miller and the rest of his squad put it all on the line for the survival of just one man.

The film earned near-universal praise from audiences and critics alike; it was the highest-grossing domestic film of 1998 (second-highest-grossing worldwide), and received eleven nominations in that year's Academy Awards (winning five). A notable fact was that Spielberg won for Best Director, but the film itself lost Best Picture (to Shakespeare in Love), one of the rare such occurrences in Oscar history.

A co-production of DreamWorks SKG and Paramount, it is now fully owned by the latter as of result of acquiring the original incarnation of the former in 2006. Ironically, Paramount now also owns the US rights to Shakespeare in Love (distributed internationally by Universal) as a result of acquiring a minority stake in Miramax (which in 1998 was owned by Disney) in 2020.

[Trope Codifier] After surviving a nearby explosion, Cpt. Miller spends over a minute gazing at the horrors of the D-Day landing in silence.

[Trope Codifier] After surviving a nearby explosion, Cpt. Miller spends over a minute gazing at the horrors of the D-Day landing in silence.