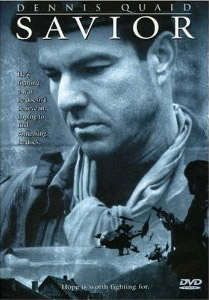 "Hope is worth fighting for."
Advertisement:

A 1998 film about the Bosnian war, starring Dennis Quaid as Joshua "Guy" Rose, a U.S. government officer turned mercenary and Nataša Ninković as Vera, the woman he is escorting to a U.N. safe zone.

Stationed in Paris on embassy guard duty, Josh witnesses the death of his wife (Nastassja Kinski) and son by Muslim suicide bombers. Immediately after the funeral of his wife and son, Joshua storms into the nearest mosque and guns down the worshipers inside. His buddy Peter (Stellan Skarsgård) catches up to him just in time to shoot a survivor who was going to shoot Joshua. To avoid being prosecuted for murder, Joshua and Peter run off to join the French Foreign Legion. After getting bored with the Foreign Legion, Guy and Pete become mercenaries and end up working for the Serbs in the Bosnian War. During a prisoner exchange, Guy encounters Vera and saves her and her child soon afterward.

He becomes her only hope for survival.

She becomes his only hope for redemption.