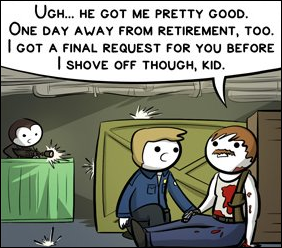 Financial planner: You haven't set aside anything for the future.
Wiggum: Well, you know how it is with cops. I'll get shot three days before retirement. In the business, we call it "retirony".
Planner: Well, what if you don't get shot?
Beat
Wiggum: What a terrible thing to say! Now look, you made my wife cry!
— The Simpsons, "Homer Vs. Dignity"
Advertisement:

Retirony is a portmanteau of retirement and Irony, though how much of the latter it has is up for debate. Retirony is a way to make the audience feel sorry for a character's death without having to actually give him more than ten minutes of screen time. Anybody in a dangerous job who's only a few days away from retirement or flying one last mission before going home to marry their childhood sweetheart is absolutely doomed to death by Retirony, whether that takes the form of a cold-blooded criminal, an ace German fighter pilot or a great big robotic monster.

Just alluding to the existence of a character's family or showing a photo of them is enough for the audience to get the idea: the guy has a life outside of being a Red Shirt.

In the rare case that an exception is made, it is usually because the character is "going home to" a child, especially one his wife gave birth to after he shipped out — perhaps Improbable Infant Survival has a proxy effect? If enough of this happens, they essentially get "promoted" up to Mauve Shirt, or leave for good, alive.

Retirony is rarely played straight anymore since it has become such a well-known and joked about trope.

Probably not intentional on part of the authors, but one way to interpret Retirony is to think of how fitting it is, as a fate for the Cosmic Plaything. Suppose that God or Fate is a jerk who nevertheless cares a lot about whatever cause the "retiree" character is working for. In that case, it fits the purposes of fate perfectly to let him survive until it's time to retire, but as soon as he's got no more victories to win, then he's outlived his usefulness and there's no reason not to let him suffer if that's more fun to watch.

See also Tempting Fate, Fatal Family Photo, If We Get Through This..., Nothing Can Stop Us Now!, Nothing Can Save Us Now and Resignations Not Accepted. Related to Yank the Dog's Chain. Contrast Crusading Widower, where the one to die is the cop's family. For the equivalent in material goods, see some variants of Action Insurance Gag.

Not to be confused with retroactive Irony.

Since this is a death trope, there are unmarked spoilers in the examples.

A soldier who was on his last day on the job and has 16 children, accidentally kills himself with a grenade while trying to rescue Ben.

A soldier who was on his last day on the job and has 16 children, accidentally kills himself with a grenade while trying to rescue Ben.