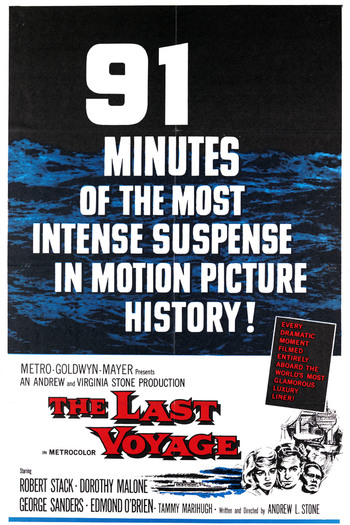 The SS Claridonnote Played by the The SS Île de France is an old ship that is scheduled to be scrapped after just a few more voyages. Cliff (Stack) and Laurie Henderson (Malone), alongside their daughter, Jill (Tammy Marihugh), are relocating to Tokyo and decide to sail there on board the ship. A fire in the boiler room is extinguished, but not before a boiler fuel supply valve is fused open. Before the Chief Engineer can manually open a steam relief valve, a huge explosion rips through the boiler room and the many decks situated above it, killing him and some of the passengers and trapping Laurie under a steel beam in their state room, in addition to opening a huge hole in the side of the ship. From then on, it's up to her husband and a crewman to cut her free before the ship goes under.