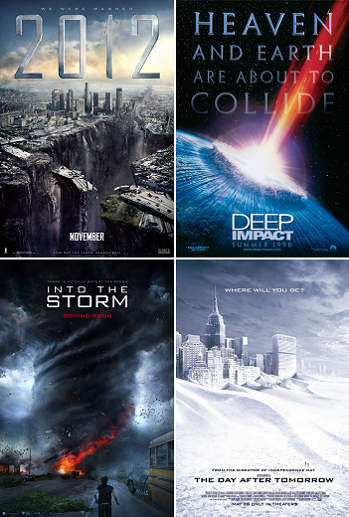 Choose your doom.note Clockwise from top left: 2012, Deep Impact, The Day After Tomorrow, Into the Storm (2014)
Advertisement:

Films whose plots revolve around something huge, horrible, and natural heading towards the protagonists, and their reactions to it.

About half have the main characters trying to stop the disaster somehow, while the other half have them simply trying to survive. In both varieties, viewers are introduced to large casts that exist solely to be killed off in various ways by the disaster and its side effects. Meteors, tornadoes, earthquakes, volcanoes, and catastrophic climate change are among the popular subjects. People who watch these movies are typically Just Here for Godzilla.

The genre became incredibly popular in The '70s, with Irwin Allen becoming (in)famous for making a number of these movies. Eventually, like all trends in Hollywood, it burned itself out, finally being killed when Airplane! tore into the genre. Modern special effects helped revive the disaster movie in The '90s, until certain events made scenes of cataclysmic destruction rather insensitive. This aversion swiftly passed.

Alien Invasion and especially kaiju movies tend to be very similar in tone to disaster movies, with their focus on destruction.

Not to be confused with the Seltzer and Friedberg movie of the same name.

Common tropes used in the genre: