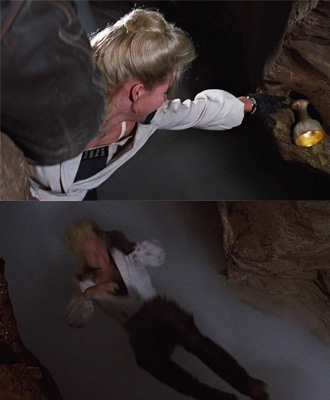 A good indicator a character is on the low end of the Sorting Algorithm of Mortality is that the character acts greedy or materialistic at any point. This is not the same as being a Rich Bitch. You can be poor and greedy, and that will still get you whacked.

The usual form of this is failing to get away from the monster or escape a major disaster because you have to pick up valuables off the floor. Or something that has intrinsic (or even personal) value to the person.

This is of course a highly Anvilicious Aesop showing that Greed is one of the Seven Deadly Sins, along with how often Corrupt Corporate Executives bite it in disaster films and Jaws ripoffs.

Can sometimes be a Karmic Death, but more often comes across as Too Dumb to Live. Often set in a Treasure Room.

As a Death Trope, Spoilers will be unmarked ahead. Beware.