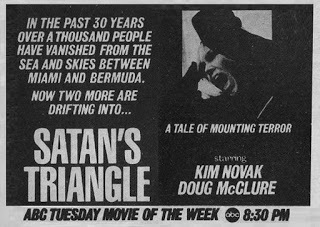 Satan's Triangle is an ABC movie of the week written by William Read Woodfield and directed by Sutton Roley that aired on January 14, 1975.
Advertisement:

Coast guards Haig (Doug McClure) and Pagnolini (Michael Conrad) answer an SOS call and find a boat full of dead bodies, with no one alive except Eva (Kim Novak). When equipment failures force Pagnolini to return to shore by himself, Haig and Eva spend the night aboard the boat, and Eva tells Haig how the ships crew rescued Father Martin (Alejandro Rey), a priest who was adrift at sea, after which their problems began.