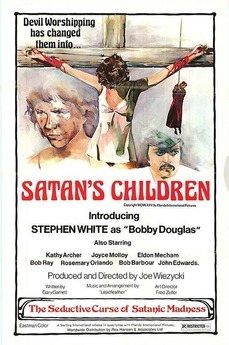 Satan's Children from 1975, is a teensploitation film and a unique entry into the Rape and Revenge genre, in that the protagonist is a teenage boy. This low budget horror flick features acting that ranges from laughably bad to eerily effective. This is mainly because the cast consists entirely of university drama students. Our main character spends about 90% of the film in nothing but his underwear, and some shots are so dark you cannot even make out the characters. The movie is mostly appreciated as a So Bad, It's Good type film.

The Film follows 16 year old Bobby Douglas as he runs away from his abusive home, crashes at a bikers apartment, is brutally raped, and then is taken in by a commune of teenage Satanists. Bobby's questionable sexual orientation causes tension at the commune however as this particular brand of Satanists are extremely homophobic. When Bobby manages to escape, he sets out to take revenge on everyone throughout the film who wronged him.

The supporting characters consist of Bobby's step-family, Mr. Douglas, who forces Bobby to do chores ala Cinderella's step-mother, and Janis, his step-sister who gets a kick out of teasing and molesting him. Then we have the Satanists. There's Sherry, the only one willing to help Bobby (though mainly because she finds him attractive.), Joshua, who is against taking in Bobby, reasoning that he is either gay, a victim or both, things Satan apparently hates. There's also Simon, the leader, and Monica, a lesbian.