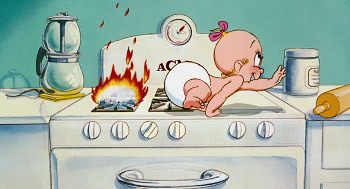 Babies learn to move quite young — far younger than they learn good judgment, or even to talk. This often leads to their wandering off (often because they are Chasing a Butterfly) and into grave danger, such as near a tub of water where they could drown. Whenever a child escapes the parental eye for a moment, expect a vanishing, and a subsequent panic before tracking the kid down. Worse occurs when the supervising character sees the baby just before trouble. A common comedy trouble is that all the problems escape the baby and hit the character pursuing. The Badly Battered Babysitter may get in that condition just trying to follow.

A trope for children younger than Free-Range Children, who would be expected to have some judgment, even if they sometimes do stupid things, and Scare Dare, as the child blunders into danger out of sheer ignorance. It tapers off by about five, when the child has enough judgment to get into danger through willfulness rather than ignorance.